The fantastic news has just broken that the Vivat Trust and Save Hadlow Tower Action Group (SHTAG) have won the 2013 English Heritage Angel Awards in both the ‘Best Craftsmanship Employed on a Heritage Rescue’ and ‘ Favourite’ restoration categories for their work on the Hadlow Tower.  Personally, I think they deserve another one for sheer determination and staying power as it’s taken 13 years firstly to buy and then raise the funds needed to restore the glorious Victorian folly.

Built by the wonderfully eccentric Walter Barton May in 1838, the Hadlow Tower, or May’s Folly, stands eight feet taller than Nelson’s Column.  It was a little smaller to begin with though and local legend says the 50 ft lantern was added so Walter could spy on his wife who was having an affair with a local farmer.  Whether this is true or not, no can tell but Walter bankrupted himself in the process and after his death his son was forced to sell the estate.

Laura Norris, the Director of the Vivat Trust, told me the folly ‘it is a pure ego piece. Walter Barton May just wanted to show people that he was as wealthy as he was’ and the fact that the tower is still standing 175 years on is testament to the craftmanship used at the time.  Despite originally housing just two servants bedrooms, everyone else lived within the main castle, no expense was spared and the lantern is decorated in an astounding array of pre-cast shapes and spiralets.  These were made using a material called Roman cement and it is the painstaking restoration of this covering that has helped to win the English Heritage Angel Awards.

Roman cement has not been used in the UK since before the Second World War and Laura had to bring craftsman from Grenoble in France to advise and teach the technique to local craftsman.  It took months to match the colour and then a battle against the elements ensued. The material sets so fast that you can feel it change consistency in your hand so any warm or cold spells greatly affected the restoration process.

I was lucky enough  to meet Laura Norris in February and see the restoration first hand.   Mud, rain and a hard hat greeted me but the effort to climb the 170 ft tall tower, despite my fear of heights and increasingly jelly-like legs, was well worth it and I thought you might like to see the ‘in progress’ photos.

You may also like to read more about the history of the Hadlow Tower here.

Many thanks to Laura Norris of the Vivat Trust and Caroline Elcombe of the Save Hadlow Tower Action Group for talking to me and allowing me to take and use these images.

One of the original doors. ©Rachael Hale aka History Magpie 2013 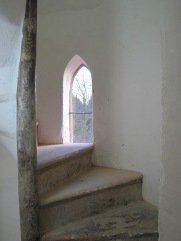 The first of many. ©Rachael Hale aka History Magpie 2013

The view from the very top. ©Rachael Hale aka History Magpie 2013 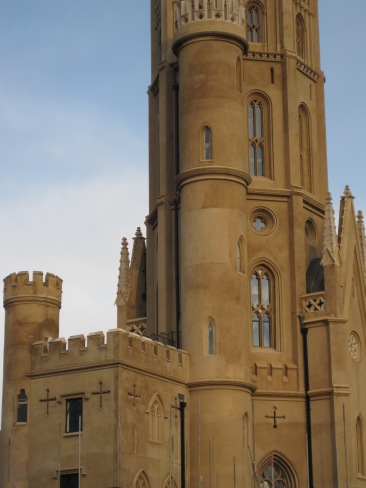 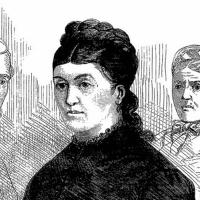